Transforming the ordinary into extraordinary

Oxygène’s dedication to service excellence is reflected in the salon’s sophisticated, friendly and relaxing atmosphere.

Our involvement in fashion shows, magazines and hair shows ensures Oxygène’s team are across the latest trends emerging in the world of fashion.

Using cutting edge techniques and naturally orientated products, the Oxygène team confidently works with their clients to update or remodel their hair and beauty looks.

We use, love, sell and recommend Australian-made Eleven Hair products, GHD, and Matrix Total Results. We offer our clients the fantastic Cezanne Keratin Straightening Treatment and Blondpro, giving your hair ultimate protection when bleaching and colouring. 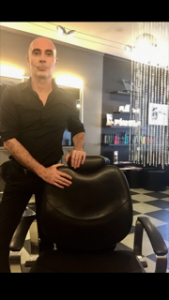 Jean-Louis has enjoyed a career in the hair and make up industry spanning more than 25 years.

He started his career in the south of France, working in leading salons, doing hair shows and fashion parades.

Paris beckoned, and Jean-Louis moved to the capital to work in some of the city’s most prestigious salons as a cutting specialist. While working in Paris he did hair styling for photo shoots for magazines through the Jean-Louis David franchise.

In the 1990s Jean-Louis joined Euro Disney Entertainment Production Centre, designing amazing wigs for all our favourite characters. As part of his role he was a hair stylist for tv shows, special events and shows such as Beauty and the Beast, Aladdin and other Disney productions.

Jean-Louis then became a freelance hair and make up artist, working on fashion shows and photographic shoots.

He moved to Australia and opened Oxygène Salon in Glebe  in 1999. The salon is now established as one of the inner west’s most creative salons, offering hair, make up and beauty services.

Jean-Louis has worked with some of the best-known names in Australia’s beauty and fashion industry, including working with Napoleon Perdis himself on photographic shoots. He has styled for film and television production.

Some of Jean-Louis’ creative work: 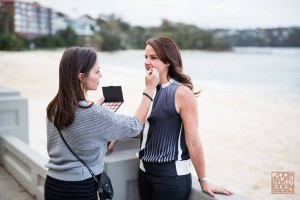 Bernadette Talbot at work on location.

She re-located to Sydney from London seven years ago after making the BBC television series Wanted Down Under and falling in love with Australia.

Bernadette has enjoyed a career spanning more than twenty years and is as passionate and creative now as when she began. She trained at the London College of Fashion, then went on to freelance for several years before opening her salon in the UK which she ran successfully for 15 years, specialising in creative cutting, colouring and up styling.

During this period Bernadette taught for Revlon Professional and Voila colour houses and South Devon College.

Some of Bernadette’s corporate work

The following are some of the clients she has also worked for: Parenting Australia mag, Bridal Mag, Style Rocks, Hype Shoes, Single Market Events, Most Watched Media,  Event Emporium, Australian Song Company, Aromatic Essentials, Black Jelly Films, BBC Worldwide, Relentlessly Creative. She has also worked on I’m A Celebrity, Get Me Out Of Here.

Contact us now to make an appointment
Use the form below or phone us during business hours on 9518 4844.
We want to make you look fabulous. Have a look at our services and price list, and then contact us so we can help you achieve the look you want.
Contact us now
Copyright Oxygène Salon